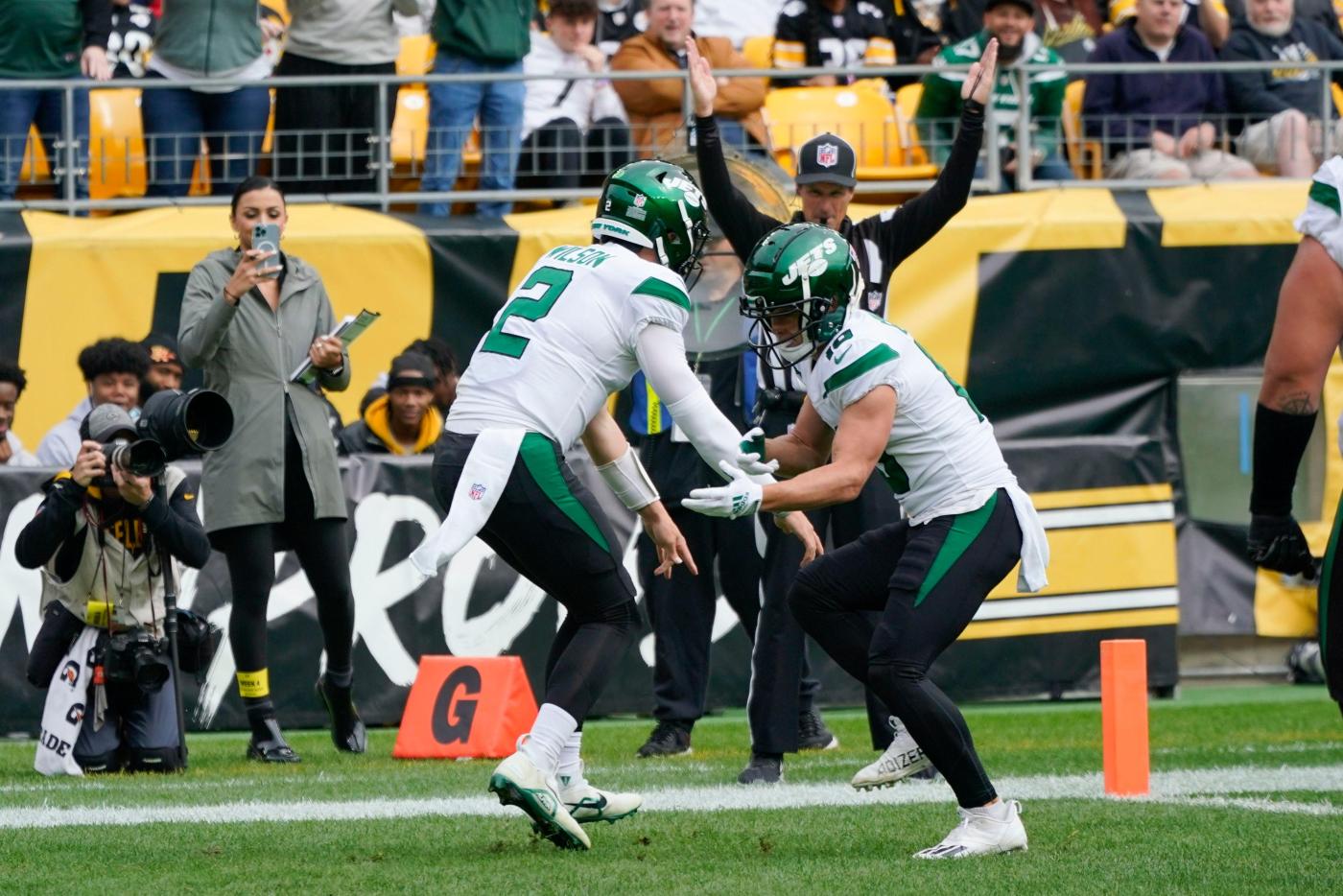 PITTSBURGH — After a dreadful showing offensively against the Bengals last week, the Jets were hoping the return of their starting quarterback would ignite a spark.

It wasn’t pretty, but the Jets found a way to come away with their second road victory of the season.

Just like two weeks ago, Gang Green had some late fourth-quarter magic.

Down 20-17 with 3:34 left in the fourth quarter, the Jets were able to drive down the field with ease after two big catches by wide receiver Corey Davis. Then a defensive holding penalty gave the Jets the ball at the nine-yard line. Two plays later, Breece Hall found the end zone, which put New York ahead by four points with 16 seconds left.

Sunday was Zach Wilson’s first game in seven weeks since suffering a bone bruise and a meniscus tear in the preseason in August. Joe Flacco started the first three weeks of the season.

Wilson had a mediocre day, completing 19 of 37 passes for 252 yards, one touchdown and two interceptions. He also recorded a touchdown catch in the second quarter.

The Jets were hoping Wilson, despite not playing the last seven weeks, would show growth in his second year as the team’s starting quarterback. While he made several ill-advised decisions with the football, Wilson was able to lead the Jets to a late fourth-quarter victory.

Then right before halftime, starting right tackle Max Mitchell went down with a knee injury and did not return.

Coming into Sunday, the Jets defense has been stout against the run. But Steelers running back Najee Harris rushed for 74 yards on 18 carries.

Neither team had a lot of success offensively in the first quarter. The Jets got their first game’s first points after Lamarcus Joyner’s interception in Steelers territory set up a 38-yard field goal by Greg Zuerlein, which gave Gang Green a 3-0 lead. After a three and out by the Steelers, fans were booing, hoping for Steelers coach Mike Tomlin to bench Trubisky for Pickett, who was the team’s first-round pick last April.

The Green and White’s third possession was its best of the first half. After starting on their own 30 in the second quarter, the Jets marched 70-yards as the drive ended with a jet sweep from Garrett Wilson as he flipped it to Braxton Berrios and he completed a touchdown pass to Zach Wilson who celebrated by doing the Griddy dance. That extended the Jets’ lead to 10-0.

According to CBS Sports, Wilson’s touchdown was the first ever touchdown reception by a Jets quarterback.

Pittsburgh finally got on the board near the midway point in the second quarter after a 51-yard field goal by Chris Boswell. Fans continued to be displeased with the Steelers offense as chants for Pickett grew louder. The Steelers added another field goal as Boswell converted on an Acrisure Stadium record 59-yarder, making the score 10-6 after 30 minutes.

Following three and out by the Jets offense, the Steelers finally benched Trubisky and put Pickett under center as the crowd erupted when the change was made. But on his first pass attempt, Pickett’s pass was intercepted by safety Jordan Whitehead at the Jets’ 10-yard-line.

However, Pickett entering the game was exactly what the Steelers needed offensively.

The Jets could not capitalize on the interception as Wilson threw his second interception of the day, this time to Minkah Fitzpatrick as he returned it to the Jets’ four-yard-line. That set up a Pickett one-yard touchdown run.

Pittsburgh also scored on Pickett’s third drive as the team drove 87 yards which ended with him scoring a two-yard touchdown that extended its lead to 20-10.

With their backs against the wall, the Jets found the end zone for the second time midway through the fourth quarter. Wilson completed a five-yard touchdown pass to receiver Corey Davis as that trimmed the Steelers lead to 20-17.

When it looked like the Steelers were going to score another touchdown to extend their lead, Jets cornerback Michael Carter II picked off Pickett on a tipped pass with 3:34 left in the fourth quarter.

The Jets will return to MetLife Stadium next week as they will host the Miami Dolphins at 1 p.m. Pittsburgh travel to Buffalo to take on the Bills.