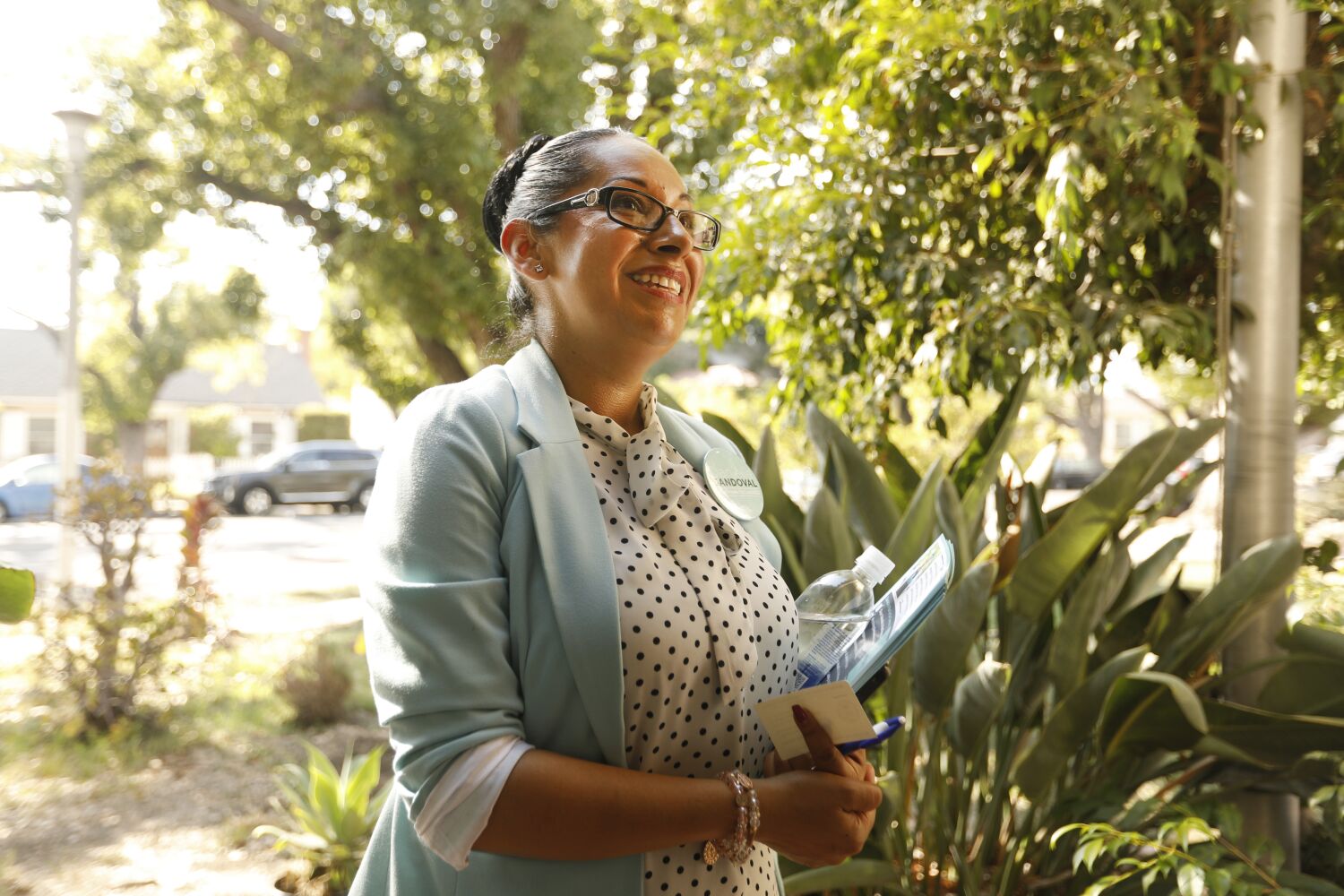 Los Angeles City Council candidate Danielle Sandoval on Friday offered her “deepest apologies” over her handling of wage-theft claims lodged against her restaurant eight years ago, marking a major departure from her previous stances on the issue.

Sandoval, running in the Nov. 8 election to replace Councilman Joe Buscaino, said in a statement that she is taking “full responsibility” and working to ensure the workers are paid “as soon as possible.” The candidate said she understands the hard work performed by people in the restaurant industry — “whether it be as a waitress, host/ess, barkeep, dishwasher or business owner.”

“Unfortunately in this situation, I fell short,” she said. “People were harmed by the lack of income, and my team and I are working to remediate the harm as quickly as possible.”

The statement, posted on Sandoval’s Twitter and Facebook accounts, is a sharp break from the defiant statements she offered over the past week, in response to questions from The Times about wage-theft complaints filed by four former employees of Caliente Cantina, a restaurant she opened in 2014 and closed within a year.

The Times reported last week that the state’s labor commissioner concluded in 2015 that a company known as Cantina Investments LLC, while doing business as Caliente Cantina, failed to pay those employees for work they had performed.

Sandoval, who is running in a district that stretches from San Pedro north to Watts, suggested in one interview that she has no legal liability as part of the LLC, which she helped form in 2014. That company is the defendant in the wage-theft proceedings.

In another interview, the Harbor City resident said she had to fire several employees for equipment theft and for drug use — but did not clarify whether those were the workers who claimed they had not been properly paid.

After The Times reported on those four cases, several of Sandoval’s supporters rescinded their endorsements. One of them was the Californians for Human Immigrant Rights Leadership Action Fund, which voted unanimously to drop their support. Another was labor rights expert Victor Narro, who has a history of advocacy on wage theft.

Attorney Tim McOsker, who is running against Sandoval, said he believes that Sandoval is only apologizing now because “her supporters are fleeing her campaign.” If Sandoval had been serious about labor rights, she would have paid her workers from the beginning, he said.

“It shouldn’t have taken two L.A. Times articles, demand letters from the state, and eight years for my opponent to start taking steps to make this right,” he said.

Sandoval has been running a competitive campaign, despite being significantly outspent by McOsker, a former City Hall lobbyist who spent four years as chief of staff to former Mayor James Hahn and several more in the city attorney’s office.

Councilwoman-elect Eunisses Hernandez has been promoting Sandoval’s candidacy on social media, urging her supporters to donate to her campaign. City Controller candidate Kenneth Mejia went to San Pedro earlier this month to knock on doors for her campaign and several others.

Sandoval picked up endorsements from United Teachers Los Angeles and the editorial board of The Times, which operates separately from the newsroom. She came in second in the June 7 primary, picking up support from two of her opponents in that race.

The Times reported last week that four former employees of Caliente Cantina testified at a hearing in 2015 that they were not paid for work they performed — a violation of state labor law commonly referred to as wage theft.

The nonprofit Wage Justice Center, working on behalf of the state’s labor commissioner, issued letters on June 30 demanding nearly $12,300 from Cantina Investments on behalf of two of the four workers who filed claims.

Three of the four have identified Sandoval as the owner of the restaurant, describing their interactions with her at a 2015 hearing, according to records obtained by The Times. One testified that she “kept giving excuses” for not paying, while two others submitted text messages in which she acknowledged they were owed money, according to orders issued by the state’s labor commissioner.

When The Times contacted Sandoval about those cases, she initially said she did not know anything about the claims, saying the business “paid everybody their checks.” She portrayed the situation as a controversy generated by McOsker, whom she called “dirty.”

On Friday, Sandoval struck a much more conciliatory tone, saying she has begun to “take steps to rectify the harm” caused to the restaurant’s workers. Although she said she did not know of the workers’ claims until July, Sandoval also said it is clear that “people have been impacted.”

Sandoval had been in danger of losing more support. The Heart of L.A. Democratic Club, another one of her supporters, said it is also reviewing its endorsement. An array of labor unions, including several who frequently contend with wage theft, issued a letter this week demanding that The Times’ editorial board change course.

Narro, the labor rights expert, said he has doubts about some of the claims in Sandoval’s latest statement — particularly her timeline laying out when she first knew of the workers’ claims. The fact that she was the registered agent for Cantina Investments, yet did not learn of the wage cases until this summer, is “mind-boggling,” he said.

Nevertheless, Narro said he is encouraged that the workers will be paid after an eight-year delay.

“She’s acknowledging the seriousness of the issue,” she said.