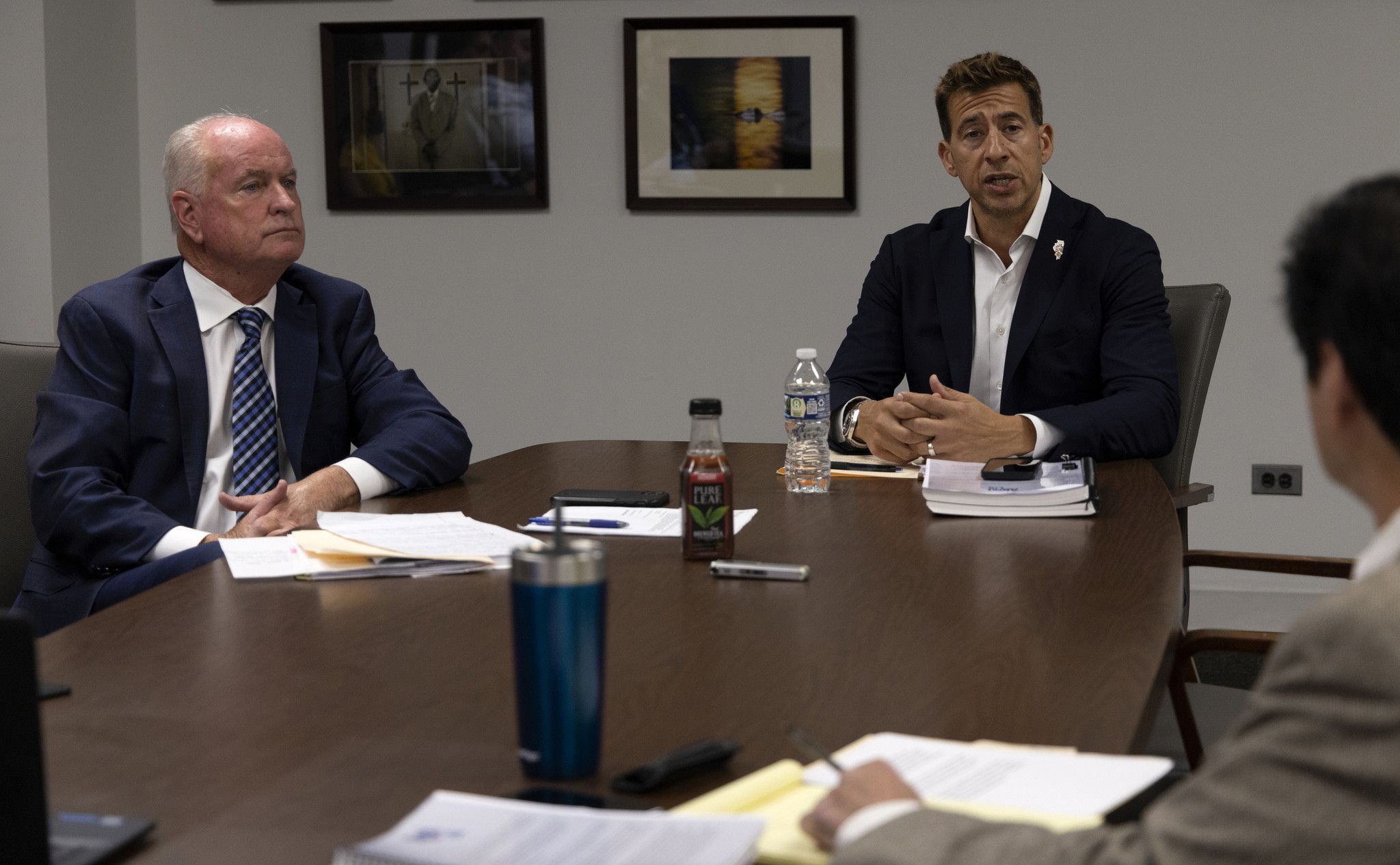 The major party candidates for Illinois secretary of state in November’s election squared off Wednesday on issues including modernizing the office, traffic safety and voting rights in an effort to make the case for why voters should choose them to succeed longtime officeholder Jesse White.

Tense policy disagreements dotted an otherwise amicable debate between Republican Dan Brady and Democrat Alexi Giannoulias in the meeting with the Chicago Tribune Editorial Board.

The session was a sharp contrast to Giannoulias’ appearance with the board before the June primary, when he and Chicago City Clerk Anna Valencia traded barbs over ethics.

On Wednesday, Giannoulias said he “respectfully” disagrees with Brady’s plans for improving the office, which prioritize additional staffing and training to cut down in-person wait times at driver’s services facilities.

A former state treasurer, Giannoulias said better technology is needed to improve the office’s online services. He said he would create an app for secretary of state services, build more robust online driver services scheduling options and offer digital driver’s licenses to reduce fraud and make the system more convenient to use.

“As we’ve talked to some seniors (by) traveling the state, they like to go to (driver’s services facilities), they’ve done it their whole lives, they understand it. They like going there physically. No one’s going to take that away from them. But new technology is crucial. And none of the technology that we’ve talked about during this campaign requires any new inventions. It already exists,” Giannoulias said.

In response, Brady maintained that it’s more immediately realistic for the office to streamline operations through cross-training and additional staffing, which would help “from a budgetary standpoint.”

Brady said he does back technological innovation for the office, pointing to legislation he backed a few years ago that allows seniors to take online-based courses on defensive driving in order to get insurance rate reductions.

But at the same time, he took a subtle swipe at Giannoulias’ emphasis on technology.

“All the things we’ve talked about, putting the apps on and making you take it and be part of, that’s fine for somebody tech-savvy. But this little device causes more accidents across the highways and byways of Illinois than anything else,” Brady said, holding up a cellphone. “And we’ve got to be very careful when we talk about the technology component.”

“Taxpayers are already paying for (the space),” Brady said. “We have space … we have infrastructure, we have everything that you need digital-wise.”

The two also offered different visions on the office’s role in elections.

Brady said the secretary of state should work with the local election authorities “who are better trained” in registering people to vote.

The disagreements continued as the two candidates discussed Brady’s plan to temporarily reduce license plate fees by $50, a move he says would provide relief to high inflation.

Emergency powers granted to the secretary of state’s office by the General Assembly would allow the future officeholder to make such cuts, which would cost the state only $70 million in revenue, Brady said.

Giannoulias countered that reduction would cost the state more than $500 million in a single year, money that would otherwise go to the state’s road and capital construction funds. He also argued that only representatives in Springfield could make such fee changes.

“You have to tell people that you would replace the $550 million a year with X or Y,” Giannoulias said.

Giannoulias and Brady agreed on the need for the office to focus on distracted driving, leading to a lighthearted moment that had the competitors exchanging a high-five.

Giannoulias said he wants to use “the bully pulpit of the secretary of state’s office” to talk to students about curbing impaired driving and speeding, and the importance of wearing seat belts.

“I think we have to do more than a bully pulpit,” Brady said. “It’s one thing to talk, and that’s very nice, … but we have to actually make sure they can tangibly respond, feel, see, more than someone just coming into the classroom.”

Brady said the secretary of state’s office could have its police department partner with schools to talk to teen drivers about the dangers of distracting driving and its consequences. But he also believes the office can “enhance” a standard driver’s education program through a partnership with a company that, according to its website, teaches teens to “control their car in unpredictable situations based on its handling limits.”

At the end of the nearly hourlong session, both candidates were complimentary of White’s tenure in office, which began in 1999.

“Someone who took an office that was mired in scandal and corruption, and he really turned it around,” Giannoulias said of White. “He’s been traveling the state with us over the last couple of weeks talking about the importance of public servants being in it for the right reasons.”

Brady said he has worked with White’s office over the years on issues including organ and tissue donation legislation.

“Secretary White and I have worked well together as representative and as secretary of state, and I believe that’s an endorsement of Dan Brady as well,” said Brady. “He’s able to reach across the aisle. He is able to bring people together and get people around a table and find out more of what they agree on than disagree. I’ve been able to do the same thing.”