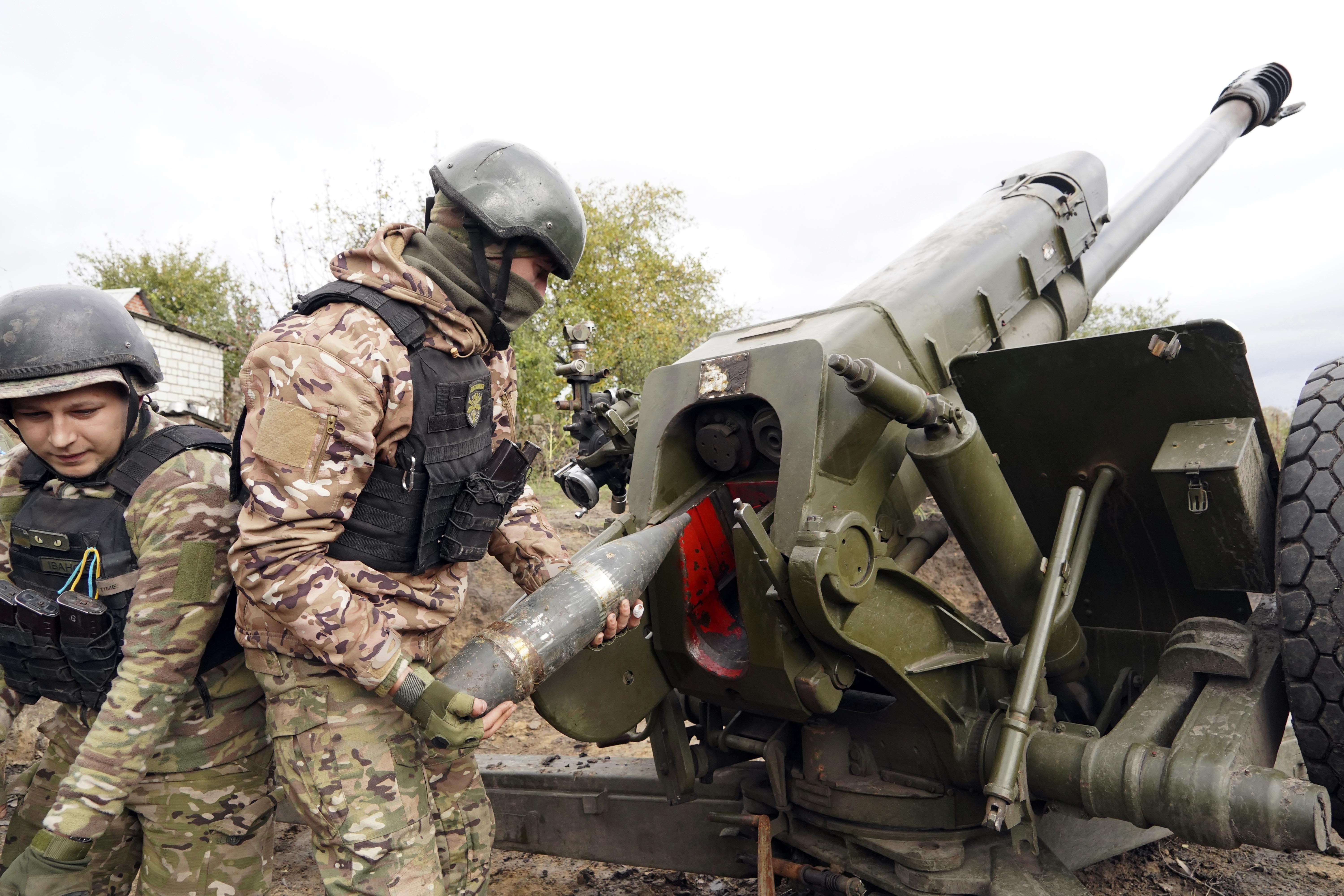 Rasmussen is meeting with U.S. officials in Washington this week. He’s on a mission from Kyiv, where he worked with President Volodymyr Zelenskyy’s top adviser, Andriy Yermak, to develop the Kyiv Security Compact. The plan encourages Western powers to commit to long-term security guarantees with Ukraine, including steady material support for the war effort and rebuilding the Ukrainian defense industry so the country can begin to manufacture and provide its own weapons in the coming years.

“We need to deliver all assets that Ukrainians need to protect themselves against those missile attacks from Russia,” he added.

No new air defense capabilities were included in the Biden administration’s $625 million military aid package announced Tuesday, which instead focused on precision artillery and rocket systems and ammunition. Those weapons and munitions will be critical over the next several weeks as Ukrainian forces continue their counter-offensives.

Kyiv is, however, slated to receive two Raytheon-made National Advanced Surface-to-Air Missile Systems by November, Defense Department officials have said. The systems can knock down drones, missiles and helicopters — which is just what Ukraine is looking for.

Yet there are worries that those systems, along with six more slated to be contracted and delivered in the future, won’t arrive quickly enough to give Ukraine the air cover it needs.

The first two NASAMS this fall “are not sufficient air defense,” said one Ukrainian adviser who asked to speak anonymously to discuss arms deliveries. “We’re not talking Stingers here. We’re talking about something that has mid-range and higher ranges.”

It will likely take time for those weapons to arrive. Western countries are reluctant to give up their own advanced missile defense capabilities. Plus, contracting, building and training crews on how to operate them takes years.

The Biden administration has been arming Ukraine in a deliberate manner, sending artillery and munitions for the immediate fight, and contracting with the defense industry for weapons such as NASAMS. It’s a two-pronged strategy that officials have said meets Kyiv’s immediate needs while setting up a consistent flow of weaponry in the coming years. The U.S. is also holding quiet talks with Ukraine and the defense industry about whether to eventually acquire capabilities such as Patriot batteries and F-16 fighter planes.

Asked for comment on the Ukrainians’ requests for the winter, a senior Defense Department official pointed out that the U.S. has provided air defense radars for Ukraine along with the two NASAMS. The U.S. also assisted with the transfer of a Slovakian S-300 air defense system in April, after which the U.S., Germany and the Netherlands all deployed their own Patriot batteries to Slovakia to backstop the country’s air defense.

The U.S. and allies have been notoriously short on Patriot air defense systems, and in the U.S. Army, Patriot batteries for years have been the most deployed units, as commanders around the globe clamor for the weapon. Likewise, NATO allies that operate the system have been careful when and where to deploy their own batteries.

If Putin launches a renewed missile campaign against critical infrastructure, the dangers to civilians will be higher than ever, the DoD official said, since “Russian stocks of precision-guided munitions are running low, so attacks are becoming even more indiscriminate.”

The official, who requested anonymity to discuss internal deliberations, said that “Russia has targeted civilian infrastructure throughout this campaign, so it’s not a leap to think they would continue.”

And Russian missiles do continue to fall. One of the deadliest attacks in recent months came last Friday when at least 30 people were killed and more than 100 wounded when Russian missiles hit a convoy of civilian vehicles near the southern Ukrainian city of Zaporizhzhia. Amnesty International confirmed the vehicles were providing humanitarian relief well behind the front lines.

Given Ukraine’s large size and hundreds of miles of front lines, it’s impossible to protect everything from missile attacks launched by Russian submarines in the Black Sea and long-range bombers flying close to Ukraine’s borders.

The lack of capabilities isn’t just a Ukrainian problem, however, which could cause more delays in rushing equipment into the country. Over the past two decades, the U.S. and its allies have “deprioritized short-range air defense and homeland cruise missile defense, and regional cruise missile defense is way behind,” said Tom Karako at the Center for Strategic and International Studies. “And so what has Ukraine taught us? Turns out there’s a big demand for air defense” that can’t be easily or quickly filled.

The attack in Zaporizhzhia hits at the heart of Ukrainian concerns and the difficulty of predicting Putin’s next moves. The strike came the same day Russia declared it was annexing four territories in Ukraine, even as Ukrainian forces continued to push deep into those areas.

Putin’s announcement and his promises to defend Russian territory back the Kremlin into a corner. It “represents a point of no return for the [Russian] regime where their minimal war aims are fundamentally incompatible with Ukraine’s and now cannot be easily revised,” said Michael Kofman, of the CNA think tank.

One of the capabilities that can be delivered to Ukraine relatively quickly and in numbers is German-made Leopard tanks, Rasmussen said, though Berlin still refuses to deliver them, citing the lack of heavy armor donated by other major powers.

The issue — as well as air defenses — is expected to be on the table at NATO’s gathering of defense ministers next week in Brussels, which will also feature a meeting of the 50-nation Ukraine Defense Contact Group as it grapples with how to equip Ukraine for the next steps in the war and the long, uncertain winter months ahead.

“As a European, I’m embarrassed by what I would consider very modest European contributions” to the fight in Ukraine, Rasmussen said. “While I have to admit that it has increased in recent months, the Germans could do more. They should deliver the Leopard tanks and France should deliver more Caesar” mobile howitzers. “The Ukrainians desperately need those capabilities, so I hope that the two countries will step up their endeavors.”

Rasmussen said the plan he and Yermak delivered to Zelenskyy would in the long run take the pressure off of Europe and the U.S. to equip the Ukrainian military, since rebuilding the shattered Ukrainian industrial base would allow Kyiv to provide for its own defense. Rasmussen kicked off his tour of Western capitals in Washington, visiting the White House and Capitol Hill, before heading to Europe to pitch the plan.

“It’s important to tell Putin that this is not only a year’s worth of weapons deliveries from the West, and we aren’t speaking about deploying our troops on Ukrainian soil,” he said. “It’s really to make them capable of defending themselves” in the long-term.